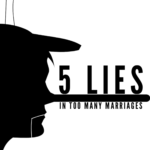 In every marriage there are valleys and there are mountains.  It’s during the valleys, the low times, that we begin to have negative thoughts and feelings about ourselves, our circumstances, and our spouse.  This can lead to lies seeping into our minds that take root and follow you, even when you emerge from those low times.  If you let them linger, it’ll eat at the very fabric of your relationship.  Here are 5 lies to reject when they come to mind.

THE LIE OF BLAME

This is the inward voice that tells you that your marriage would be better if your spouse would just _______.  You fill in the blank.  Maybe it’s get a better job.  Maybe it’s keep the house cleaner.  Maybe it’s be more interested in sex.  It does not matter what you fill this blank with.  It is a lie.  If you were to somehow “help” them see the “error of their ways” to the point that they change, it would only lead to something else filling the blank.  It is a never ending carousel of blame.  We must work to have right perspective of relationship, not be right in the evaluation of perfection in someone who could never be perfect.  To reverse the lie, point the finger at yourself and take responsibility yourself.

THE LIE OF CIRCUMSTANCES

This lie hits hard in some cases and sometimes it is a slow simmer.  It is believing that everything would be ok between you and your spouse if it wasn’t for a certain circumstance.  In some cases it is life altering and unforeseen.  Perhaps it was the death of a family member or getting laid off from your job.  This is sudden and dramatic.  Other times it’s gradual, and the negativity you feel towards your spouse has simply been growing over time.  Every circumstance is an opportunity.  What we do with that opportunity draws us together or pushes us apart.  To reverse the lie, stop blaming the circumstance and determine how you will use it to draw closer with your spouse.

THE LIE OF FAILED POTENTIAL

Have you ever had the thought, “I could have been so much more if it weren’t for my spouse?”This thought is rooted in the idea that your spouse should be just like you and that should make you twice as likely to succeed in whatever it is that you are interested in.  Here’s the problem with this lie.  It doesn’t take into consideration anyone but you.  Like your spouse is only in the marriage for your ego.  This takes them from being your partner and spouse and turns them into your life assistant.  What you need, is to be the best your are meant to be together.  There is an old saying that goes, “Rising tides raise all ships.”  This is especially true in marriage.  Too many marriages end in divorce because one felt they could achieve more on their own.  This prioritizes self, career, ego, and whatever definition of success you have accepted.  Marriage prioritizes each other to be the best version of you as a couple, even when having individual responsibilities and goals.

“Self-centeredness is the enemy of marriage.”

Your potential is great!  The lie is that your marriage serves to make you great individually.  To reverse the lie, serve your spouse to make them great.

THE LIE OF LUST

The lie of lust doesn’t dig deep.  It’s right there on the surface.  Literally.  The lie of lust is believing that if your spouse were more attractive, then you would not feel this way about others.  You would not have a wandering eye.  You wouldn’t have the temptation you do.  Therefore, it’s their fault they have a few extra pounds, they don’t groom just right, or over time they have let themselves go.  He has a gut where strong abs were previously.  She isn’t as slender and shapely as she once was.  But you are close enough to someone at work that has emotionally filled that void.  Or you are just one keystroke away from finding everything your mind says you deserve that he or she should be.  The lie of lust says your relationship hinges on attraction.  That we know what beauty looks like.  It’s on that magazine cover, it’s that tv actor, or seen in videos that we can access online.  But a healthy, mature relationship says attraction is many things on many levels.  To reverse this lie we must train ourselves that our spouse is the standard of beauty.

“A healthy marriage leads you to view your spouse as the standard of beauty.”

THE LIE OF PAST DREAMS

This lie can haunt you forever if you let it.  It’s the idea that if I had married the “one that got away” I would have a better marriage today.  It is likely we believe this for one or more of three reasons.  First, our memories of who they were back then and what we projected in our minds that they would become.  Second, it’s because of how poor we believe our current relationship to be.  Third, it’s because of social media.  We see all the wonderful things he or she is up to today.  How they’ve aged gracefully.  How they seem to have so much fun and live such a better life.  But social media lies.  Social media is a resume for those applying for world approval.  We only share the best and none of the worst.  Even at times when the worst is shared it’s to gain something such as sympathy, attention, or support.  There are positive, good uses for social media, but gauging and comparing your relationship to the potential of one with someone else is not one of them.  To reverse this lie, let yourself be reminded that if you were with someone who seems to have been that great, yet ended up with the spouse you have now, there must have been something wonderful that led you to believe this was the top of the mountain.

Now, go make that mountain top relationship a reality.  Lies only hold you back.  Make your future what you dreamed it to be.  Only do it together.  With love and service while having eyes only for your spouse.  Your ideal marriage is possible.  And you’ve already found them.

Comment below any lies you’ve overcome in your marriage!